Happy 4th of July from the AIRE team!  As we head into the holiday weekend, we have received some questions about fireworks and their effect on air quality.  Here is an excerpt from our 2015 post on the topic.  Have a happy and healthy holiday!

While they are beautiful and festive, fireworks often have a major negative impact on air quality. Concentrations of fine particulate matter skyrocket during and after holidays such as New Year’s, Diwali, or the 4th of July in the US where fireworks displays are prevalent.  The particles generated often contain elevated levels of toxic chemical components such as metals (the same ingredients that give the fireworks their impressive colors).

Fireworks are not a regulated source of air pollution since they only impact air quality a few nights a year in most places.  However, sensitive populations including asthmatics may want to think twice about breathing the smoke created on those festive nights (or at least carry your inhaler when heading out to watch the fireworks this weekend!). 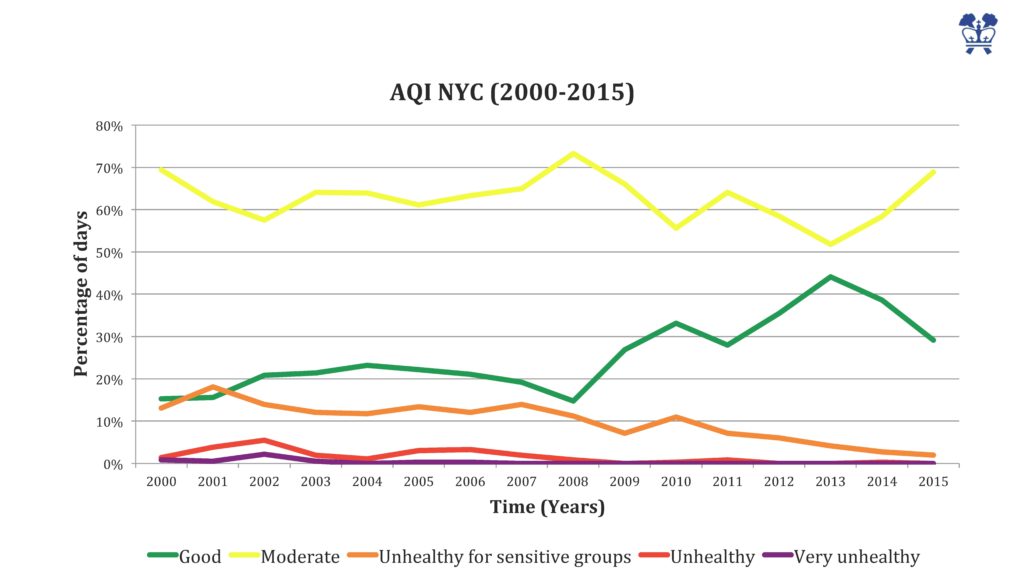 ccording to the New York City Department of Health and Mental Hygiene, air quality in NYC is getting better.  Here at AIRE, we hypothesized the opposite last summer.  Based on a very unscientific survey of our own asthma responses and perceptions of visibility in the city, we suspected that summertime air quality had been on the decline in recent years (2014-2015).  To test this hypothesis, summer undergraduate researcher Silvia Vina Lopez gathered Air Quality Index (AQI) data for NYC from 2000-2015, and data on criteria pollutant (SO2, CO, NO2, O3, PM) concentrations from 9 NYSDEC monitoring sites around the five boroughs. Here are some highlights of her findings: 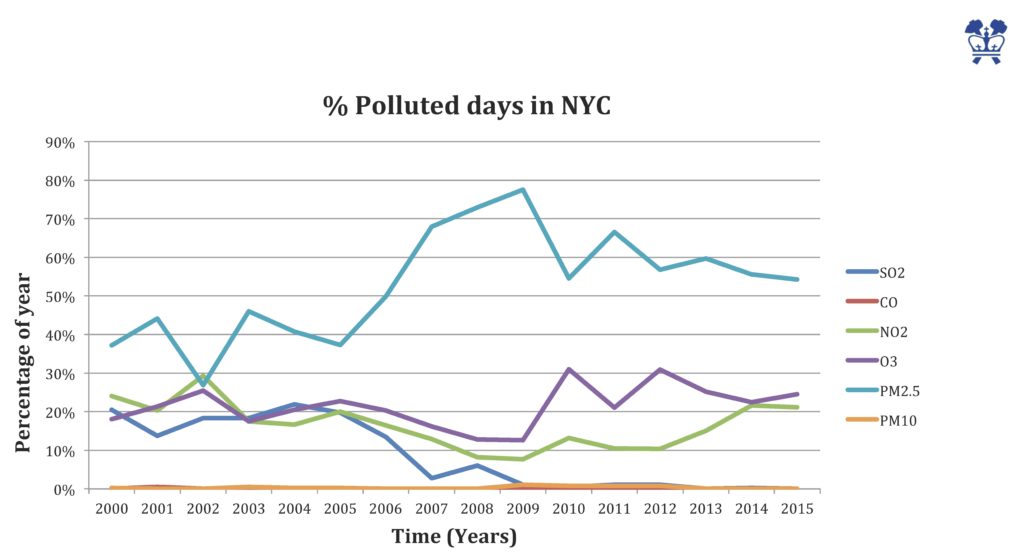 To dig deeper into these trends, Silvia investigated the frequency with which each criteria pollutant exceeded the 24 h NAAQS standards. She found that SO2 violations decreased between 2004-2009 and have stayed low. The City attributes this trend to changes in heating oil regulations. On the other hand, the frequency of PM2.5 violations increased over the same time period and has remained elevated since 2009. This value decreased somewhat between 2007-2015, consistent with the data presented in the City’s survey, which covered 2008-2014. However, the average number of PM2.5 violations 2009-2015 was still significantly higher than 2000-2005.

The verdict: air quality in NYC is not bad and getting better in general.  However, work needs to be done to reduce PM2.5 violations, and hold on to the gains made between 2008-2014.  One possible source of elevated PM2.5 not mentioned in the City’s report is secondary organic aerosol formation: the formation of PM2.5 in situ, due to gas-phase reactions of oxidants and volatile organic compounds (which can be natural or man-made).

Moms Clean Air Force is an organization of families fighting against environmental pollution.  Their website is full of excellent resources, with information on such topics as indoor air pollution, fracking, smog, and more. Our favorite feature is the “mom detective.” They have a very active and interesting twitter feed at @CleanAirMoms. Moms Clean Air Force is sponsored by the Environmental Defense Fund.

This cold, cold Valentine’s weekend may bring to mind staying indoors with your sweetheart and lighting some candles.  Well, the AIRE team would like to suggest roses for your celebration this year instead, because candles are a notorious source of indoor air pollution, and that’s not very romantic!

The open flame of a candle produces aerosol particles. One study found that a candle can be one of the a strongest sources of ultrafine particulate matter in the home, stronger than even a burning cigarette (Afshari et al. 2005). Paraffin-based candles emit toxic compounds like toluene and benzene (because paraffin is a petroleum byproduct). Scented candles up the ante due to the semivolatile organic compounds  that are used to give them their delicious scents.  These compounds may have their own health effects, or contribute to secondary organic aerosol formation.

If you do burn candles in your home, good ventilation is key.  You may also want to choose a beeswax or soybean-based, unscented candle.

Google deploys cars all over the world to acquire panoramic photos for the Street View feature of Google Maps.  Now, Google Earth Outreach has partnered with sensor company Aclima to add another dimension to the information collected by the Street View Cars: air pollution.  Sensor-equipped Street View Cars have been used to detect methane leaks from natural gas infrastructure.  More recently, the Aclima/Google collaboration  played a role in the NASA/EPA led measurement campaign DISCOVER-AQ, monitoring a variety of criteria pollutants as well as volatile organic compounds on the streets of Denver, CO.

Mobile air quality sensor networks are an interesting and potentially important complement to the stationary sensor networks deployed by the US EPA and local environmental agencies around the world.  The spatial coverage of these mobile networks will be much more extensive than any stationary sensor network.  They also offer knowledge of pollution on the roadway, whereas stationary sensor stations are usually located away from street level, for example, on top of buildings.  However, as stated by Aclima on their website, “vehicles and buses that drive repetitive routes through cities” offer the best platform for acquiring air quality data which varies with time of day, day of week, and month of the year.  The Street View cars cover a wide range of locations around the globe, but they do not return frequently to the same location. Vehicles such as the taxi fleet of New York City might be an ideal platform for a mobile air quality sensor network.

Scientists and educators from NASA and UCAR have written a storybook entitled “What’s Up in the Atmosphere? Exploring Colors in the Sky” aimed at elementary school-aged (K-4) children, in which atmospheric aerosols play a starring role.  The story follows a group of curious students who, under the guidance of their teacher, investigate the connection between the appearance of the sky and asthma symptoms in their fellow students on a given day.  The students in the story (and the readers) learn about atmospheric aerosols in the process.  The storybook includes a teachers’ guide with glossary.